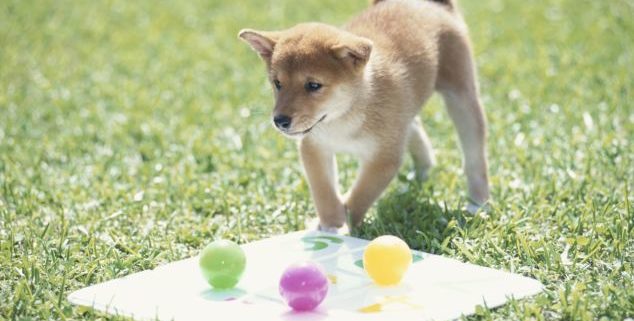 Is everything in a dogs world black and white? We get asked this question almost everyday at Splash and Dash Groomerie and Boutique. This idea has been widely accepted for decades, but in all reality, this theory is completely untrue. Another misconception is that Dogs only see in shades of grey, this is incorrect as well. The simple answer to this common misconception is that people often misinterpret the meaning of being color-blind.

Can Dogs see color? The answer isn’t so “black and white” as many think.

What is Color Blindness?

This topic actually dates back to the 18th century when English scientist John Dalton conducted some of the first studies on congenital color blindness. Dalton became aware of the phenomenon of color-blindness because both he and his brother weren’t able to recognize some colors, confusing red with green and pink with blue.

The most common color-blind defect in humans is the red and green perception. It is mainly caused by abnormalities in color-detecting molecules known as cones in the retina (but we’ll talk about that more later).

This truth is, dogs do in fact see colors, but the colors that they see are neither as rich nor as many as those seen by humans. Look at the example below to understand the colors your dog is seeing.

The Science Behind It

You weren’t just going to take our word for it, were you?

Alexandra Horowitz – author of “Being a Dog” – told us that it’s difficult to know exactly what colors a dog sees, but it’s probably similar to what we see at dusk.

In the eye are light receptors called cones and rods. Cones help us distinguish different colors, while rods help us see in dim lighting. Well it also turns out that dogs just happen to have fewer cone receptors in their eyes than humans. This means that they can’t see as many colors.

Human cones are able to detect 3 different colors: blue, red, and green. Dog cones can only detect 2 colors, and no one is exactly certain which colors they are able to detect, however some experts believe it could be blue and yellow.

In What Ways are Dogs Eyes Better Than Humans?

Dogs actually do have a wider peripheral vision than that of humans. This is credited solely to eyeball placement! It’s simply because dogs’ eyes live on either side of their heads, they can see an impressive 250 degrees. This is 60 degrees wider than their human friends, who max out at 190 degrees. Of course, there’s a range somewhere in the middle — a Labrador, for instance, has a much different facial structure than a pug.

The pro to having close-set, front-facing eyes? The central field of vision where both eyes intersect, which helps with details and depth perception. Where humans have a large amount of this binocular vision, dogs do not.

How Well can Dogs See?

This is a common question when Dog owners go to the local vet with eye concerns. The truth is, if your dog was to walk into an eye doctor today he would probably be prescribed some form of eye ware! If a human’s comfortable seeing 20/20, dogs are down at around the 20/75 range. No need to worry, dogs are still getting a general picture idea of the object or scene in front of them. It’s not like your dog needs reading glasses anyway. Can Dogs See in the Dark?

Dogs eyes actually have more rods than their human counterparts, which is also the reason why they see much better at night time than we do. Dogs also have an extra layer of eye tissue that humans lack called the ‘tapetum lucidum’, which reflects light into the retina. This extra layer of eye tissue boosts dogs night vision even more, and is a reason why your dogs eye might shine in the dark.

Dogs see very well in the night time because of the ability to adapt to low-light vision. No one is exactly sure how much better dogs can see in the night time, however it is a noticeable advantage. Dogs have evolved to see better in both bright and dim lightning, whereas humans do best in bright light.

How do Dogs Perceive Color?

Researchers at the University of Santa Barbara conducted an experiment where they taught dogs to pick the odd-colored circle out of a choice of three circles. If the dogs were showed colors that they could not distinguish, they would fail the task.

Dr. Gerold Jacobs, Professor of Psychology at the University of Santa Barbara, lead much of this color vision research in dogs. He is careful to point-out that while we cannot determine exactly what the dog perceives the color to be, we think what humans see as a red, orange, yellow or green appears as different saturations of yellow to a dog. While blue-green, blue-violet appear as different saturations of bluish gray to a dog.

Scientists experimenting to see if dogs recognize certain colors better than others. The Dog on the left has a reaction when seeing blue and yellow, compared to the dog on the right who has no reaction to the colors green and red.

What Colors do Dogs See Best?

If you were to throw a green tennis ball in high grass do you think your dog would be able to find it? It’s possible, although it would be much easier for your dog to find that tennis ball if it were blue or yellow.

Dogs can see best if the color is either yellow or blue, this would mean a lot of what dogs are seeing in the world is grayish-brown. That lush green lawn that us humans see looks more like a field of dead hay to a dog.

Now that you know that dogs don’t see certain colors in the way humans do, it would make sense to purchase products based on what would be more pleasing to your dog, rather than yourself. Buying a toy that is easier for your dog to see should be a top priority when you decide to shop for your pup. The picture above shows the comparison from Human to Dog eye sight. Keep this in mind when buying certain colored toys for your pup

Our ‘Cycle dog’ toys are very colorful and Eco Friendly. Help reduce you and your dog’s carbon paw print with our line of eco-friendly toys and accessories, all of which are made in the United States out of high quality recycled materials.

Our Motto at Splash and Dash Groomerie and Boutique is to play dirty and live clean, which is why we offer Eco Friendly Dog Supplies & Accessories.

Does My Dog Have Worms?
Scroll to top